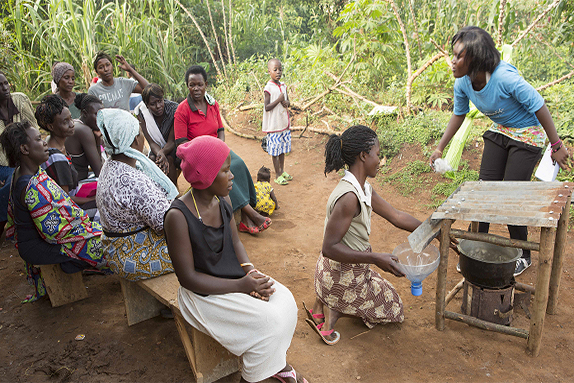 Let THEM create impact: insights from the Healthy Cooking Challenge and tips

Recently I received an email from Vera van Rijn, one of the researchers of the Healthy Cooking Challenge:

“Improved cooking shelters! With a system to catch rainwater and purify water, how brilliant!”

She had just received an email from a local partner: new ideas have developed ánd executed, on top of the intervention that was already developed during the action research! In this blog you will get 6 tips that will help you get the best out of your target group, so that they can create enormous impact during your project!

What has been developed then?

One of the interventions that slum inhabitants came up with out of the action research – the Healthy Cooking Challenge, is the cooking shelter, a mini-rooftop under which people can cook outside, so that they and their kids no longer breath the toxic air of cooking on charcoal. Not even a week later the slum inhabitants were building their own cooking shelters, investing about 1 Euro per household.

The cooking shelter is a super small solution to a super big problem. Yearly, 4.3 million people die from the concequences of indoor cooking worldwide. Especially kids – who often play and sleep in the same room as where their parents cook- are at risk. It is also called ‘the silent killer’ as only little is known about this problem, especially among the slum inhabitants, but also among local doctors and health workers.

Vera is, just as her fellow researcher Ilse Fickweiler, already back in the Netherlands for a month, but the work in the slums as a result of the action research is continuing undisturbed. Soon after the cooking shelters were built, new ideas arose:

“On top of those cooking shelters we can build a water catching and purifying system!”

And that’s where Vera got that email from, from local partner Revelation Life, with pictures that speak nothing but the inspiring truth.

And that’s not the only thing

At last, the doctors who participated in the study found that the Village Health Teams (VHT’s) should get an important role in this project. It is up to them to create more awareness among the slum inhabitants about this -for them practically unknown- disease. So, a 5-day training was created for the VHT’s that is successfully fulfilled.

Also the mothers seem to be enthusiastic and proud of the cooking shelters, so the word spreads quickly. In this way all slum inhabitants become aware of the lungproblems due to indoor cooking and the low-cost solutions to prevent them.

Revelation life is now lobbying at Local Councils (LC’s) of other slum areas to also give this free training to VHT’s and to spread the message through the film in their cinema’s. Up till now, LC’s are very enthusiastic about this. So hopefully soon there will be an upscale to other slums!

How is it possible that people respond so enthusiasticly on something they developed themselves?!

Now you may wonder how it is possible that people could start this movement en masse in such short time, as it is the driving force of sustainability.

Hereby some factors that could have contributed, with tips that will help you to also create impact -correction- to let thém create impact.

1.  Exactly the fact that THEY developed something themselves

All stakeholders were involved from the very beginning of the Challenge. During the fieldwork, the researchers did not know yet what the solution to the problem of indoor cooking could be. Exactly that blanco mind has made sure that not any idea was pushed ‘from the west’: the idea came from the locals themselves and was developed by themselves. So, my tip here is: conduct extended (action) research to the local needs before implementing any project and involve local stakeholders from day 1 of your research. Don’t only use your research to collect data but also to facilitate that process in which people can speak out and develop their own ideas.

2. Finally being able to speak out your opinion

During in-depth interviews and focus groups (group discussions), slum inhabitants had the opportunity to speak out their opinion. A bit unfamiliar at first, as their opinion has been suppressed for a long time by -as they call them- ‘the PIG’s’: People In Government. Speaking out your opinion gives you an enormous boost in terms of insight and motivation, something that researchers Vera, Ilse and Rachida clearly observed during the focus groups.

No action research is the same and for each and every research it is important to see which methods are best suitable for the research subject and the socio cultural context. During the Healthy Cooking Challenge, first in-dept interviews were held with slum inhabitants and other stakeholders, to envision well the situation. After that, focus groups were organised, where several stakeholders came together to discuss the results of the interviews. During two of those interviews, appreciative inquiry was applied. This is a structured method consisting of 4 phases, in which you unravel what is going well in the community (Discover), what is the ideal situation – in this case, cooking in a healthy way (Dream), how to get to that ideal situation (Destiny) and which actions to undertake for that (Deliver)

4. The actual speaking out of your thoughts as a participant already provides a clearer view to them

…and if you do it right, will your way of questioning during interviews and focus groups already lead to that positive mind switch that makes people think in terms of solutions. Often we are so stuck in all that is not possible, that we do not expect ourselves to come to those typical brilliant solutions. Until you – whether or not by an outsider with a fresh view- get to that point that you will think outside of your ‘problem frames’.

My tip: make sure you prepare your interviews well. The way in which you ask your question and which words you use determines to a great extent what kind of answer you will get, in how far that answer represents the truth, how much information you get and which kind of feeling you provoke to the participant. He or she needs to feel that his or her thoughts are appreciated and that they are safe with you. If that’s not the case, you will not get much useful information. How do you get that positive, comfortable atmosphere in which the participant can speak freely? You can learn all of that during our 7Senses Interview Trainings.

Where people have completely lost hope, can the positivity and trust of an outsider revive that hope to a great extent. Vera, Ilse and Rachida expressed an unexhaustive positive energy and trust of which I am conviced that those must have been copied to the locals.

However, as an outsider you also need to be realistic. The Muzungu (white man) is still seen by locals as the one who comes with a bag of money, so sometimes people are inclined to wait until that bag arrives, thinking that they themselves cannot do anything about the situation. Ilse had a brilliant quote to her research participants:

Wouldn’t it be a waste if we would gíve you something, because if we are gone you will still be without anything! The focus group participants reacted very positve to this eye opener and started brainstorming about locally driven, low-cost solutions. Who became reality not even one week later.

So here’s my tip: Throw your insecurities away -people will notice insecurity which will do your project no good- and always stay optimistic, positive and full of good faith and express that to people.

Believe in the potential of the crowd!

Vera, Ilse en Rachida were working together with Comedev, a Ugandan non-profit organisation working with ‘vulnerable groups’ such as the slum inhabitants, to improve their livelihoods. For the interventions that the slum inhabitants developed it was good to partner with an organisation that focuses specificly on this issue of lung infections and indoor cooking, and soon the researchers found Revelation Life. They were super enthusiastic about the research and its findings and got involved in implementing the cooking shelters, the educative film in the cinema’s and the trainings to the Village Health Teams. They also wrote a blog about the project on their website.

Here’s my tip: what we -unfortunately- still see a lot, are projects that operate fully independent of each other. Impact stays low or worse, organisations inhibit -mostly unaware- each other’s work. A waste of time, money and effort, as combining forces can creatly improve impact. Always try to find partnerships with local organisations that focus on the same problematique.

I hope these tips are useful to you, we are always eager to hear your stories!