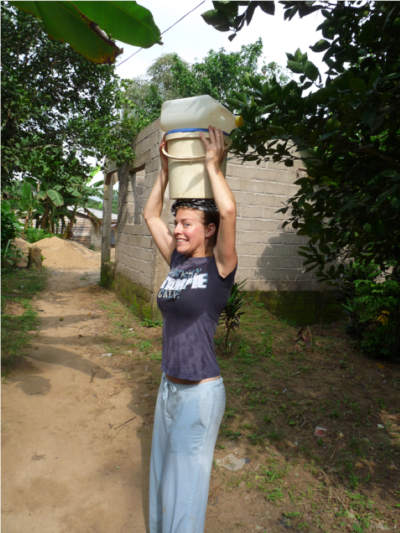 My decennium in a nutshell…

We’ve just ended a decennium… Thinking about it, I see myself back at the beginning of the ‘10’s’ in Cameroon, where I coordinated a few projects for a Dutch ngo. One of those was a water project, installing a waterpump in a small village that lacked running water. People walked about half an hour to find a tiny stream of water, from which they fetched a few liters of water daily to carry home on their heads. Curious as I was, I wanted to experience what they experience on a daily basis. As you can see in the picture it wasn’t easy and I remember bad neck aches the days after.

This picture above was taken 10 years ago… Can’t believe time flies so fast! Anyway, back in those days in Cameroon I had to execute a project plan that was designed by Dutch people, from their desks in the Netherlands. Although I had experienced the power of Participatory Action Research for the first time two years earlier in Guatemala, I was impressed by the professional look of the project plan and thought ‘that was the way ngo’s work and that’s probably the right way’. Locals were hardly involved in this project. Once in Cameroon I was put up with the one pitfall after the other.

I remember like it was yesterday, that I stood at the borehole with the local project leader, looking at a half-dead python slowly crawling at the bottom of the hole while he said:

I was flabbergasted, suddenly realizing there might be people who do not want running water in their village. Maybe people who sell bottled water? Or women who actually enjoy fetching water with their friends, finally getting out of their houses? I did not know, because I had not researched perspectives of the locals.

The deception and confusion at that time were hard, but gave me an important insight: what happened in Guatemala should happen worldwide! I started seeing the differences between facilitating local people in designing projects and designing it from a desk far away.

So, my last decennium started with further researching the differences between top-down development work and Participatory Action Research and I became more and more convinced that our current societal problems desperately need an approach where entire populations can contribute to tackling those problems in a way that fits their needs and values.

Over and over I discovered new reasons why Participatory Action Research works. The process isn’t easy and requires multiple skills (which everybody can learn though), but hey, who said solving complex problems is easy?! Quick fixes don’t work and we should not expect from a small group of leaders to solve those problems for us.

We need to MOVE people. Ordinary people like you and me.

When we are capable of elucidating those peoples’ perspectives and facilitate all of them in contributing to a better world in their own ways, we can achieve impact beyond our own imagination, because

if there’s one thing we have in abundance in this world, it’s PEOPLE!

Since 2013 I have a free ticket to pursuing this, with 7Senses. We don’t focus on a certain discipline or niche (something I was strongly advised by marketeers when I started 7Senses), we focus on all kinds of complex problems. Whether in the field of public health, climate change, nature conservation, human rights, poverty or whatever else, we can always find a way to apply Participatory Action Research to it. PAR is not a fixed method, it adapts to any situation and that’s the beauty of it.

And I love it!

Have a great new decennium!