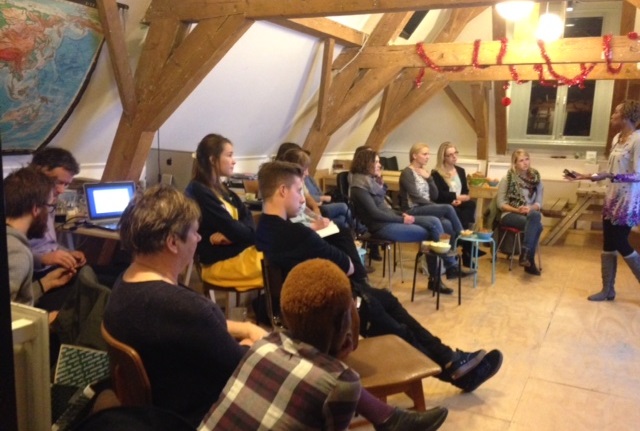 Phyllis Livaha is Coordinator of the Female Rights Challenge in Kenya. She conducts PAR for her PhD at the Erasmus University College. She writes blogs about the progress of the project. ‘Never say never’ is her very first blog.

Growing up, there were two jobs I always said I would never take: secretary and teacher.

Well, as it turns out, I’ve taken both, and I still have one – and I love it, because as a teacher of human rights law at Erasmus University in the Netherlands, I find I have as much to learn from my students as they do from me. Every day is an opportunity to learn something new – whether from colleagues or from students.

But being in academia also requires doing research, which is something that I dreaded until I got in touch with Madelon Eelderink, the founder of SEVEN SENSES.

Don’t get me wrong. I love learning, but I didn’t see the value in writing a book or some articles that would only be seen by a committee of ten other academics who would question me for forty-five minutes after a fifteen-minute presentation on work I had done for maybe four or more years.

How do I create impact with my work?

I wanted my work to have some sort of impact – to matter – and to reflect what communities had done for themselves, rather than what I, the ‘wise’ outsider, learned about them and how I could recommend they improve their lives, knowing that none of these words would never be put to use.

It was a conversation along these lines that brought me to SEVEN SENSES. I was speaking with Ashleigh, one of my colleagues of Erasmus University College, who told me SEVEN SENSES would be something that I would love to do. And boy, was she right!

After a few days Ashleigh told me that Madelon wanted to talk to me. Of course I wanted to hear it from the horse’s mouth. Madelon told me all about 7Senses and the projects they conduct, the “SEVEN SENSES Challenges”. I got very excited, and that night, I stayed up till 3 am working on my proposal on Female Circumcision, a topic that has been of interest to me for a while. But that’s a story for another day. I sent off my proposal on Female Circumcision in Kenya and to Madelon and the board of the SEVEN SENSES Foundation. A few days later, I got the good news that my proposal had been accepted. I was part of SEVEN SENSES Action Research Academy. Wow!

Madelon then contacted me and told me that there was one other person called Anne Braakman -alias Alim- who was interested in doing a Challenge in Kenya about education and talent development. I came to meet Alim at a leadership festival hosted by NHTV University of Applied Sciences – our very first 7Senses Academy day.

That day was the kick-off of intensive training sessions to get us ready for our Challenges. SEVEN SENSES uses a different kind of method to do research, the main thing that attracted me to the Academy. Participatory Action Research involves the community from the start. As a researcher, I don’t just collect data from the community, but I act as a facilitator and allow the community to fulfill an active role in the co-creation and implementation of local solutions within their range of possibilities, empowering them to tackle social issues.

We started with a bang, and we crammed a lot into a few weeks. We began with the writing of proposals and how to approach various organizations, and then we went into the content of the research, which covered the research design, collection of data and intercultural differences. The training is continuing, and the irony is that after a long day I go home more energized than tired!

During the Academy in the Netherlands, I have also met amazing people who have great energy. One of them is Evert Jan van Hasselt, who captured my attention when he talked about Dreams during the festival at NHTV.

I also got to meet other people who are using Participatory Action Research in different projects as well as the pioneers of this type of research. I am now looking forward to the next step of my journey, which is the 7Senses Challenge itself!