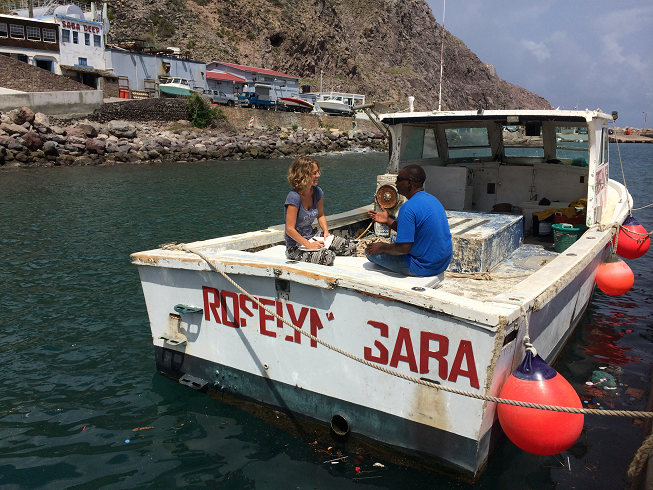 What seemed so far away back in summer 2016 when I did action research on Saba, has come close with the blink of an eye. Through action research, fishermen had co-created a seasoning system for the endangered redfish; on the 1st of April 2017 they will take out their redfish traps and leave them to recover for half a year. A tough decision as it hurts the wallet, but the best one for boosting recovery of the redfish and the marine ecosystem. That turns out to bring new economic incentives for nature conservation from an unexpected angle.

In 2016 I was asked by the Dutch Caribbean Nature Alliance (DCNA) to conduct action research on Saba to find ways with local stakeholders such as fishermen to save sharks from extinction. But how to get fishermen to save sharks if that’s not in their interest? They are eating their freshly caught fish! Sharks are more of a hassle than useful to them, even though some fishermen acknowledged the importance of sharks for the marine ecosystem as a whole. “So why not broaden our perspective from ‘sharks’ to ‘marine ecosystem’?” I proposed. DCNA agreed, and so I started my action research on the beautiful island of Saba.

With only the little knowledge of the marine ecosystem I could remember from high school I stepped on that plane. At first, fishermen were surprised (“you are not an expert?!”) and a little suspicious: (“are you from the government?”) wondering if I would come to Saba to -as they say- push another law down their throat. Nope, none of that. My aim was to help them co-create something that’s useful for them while improving the balance of the marine ecosystem. As sharks need a healthy marine ecosystem for their survival, this indirectly contributes to saving sharks. 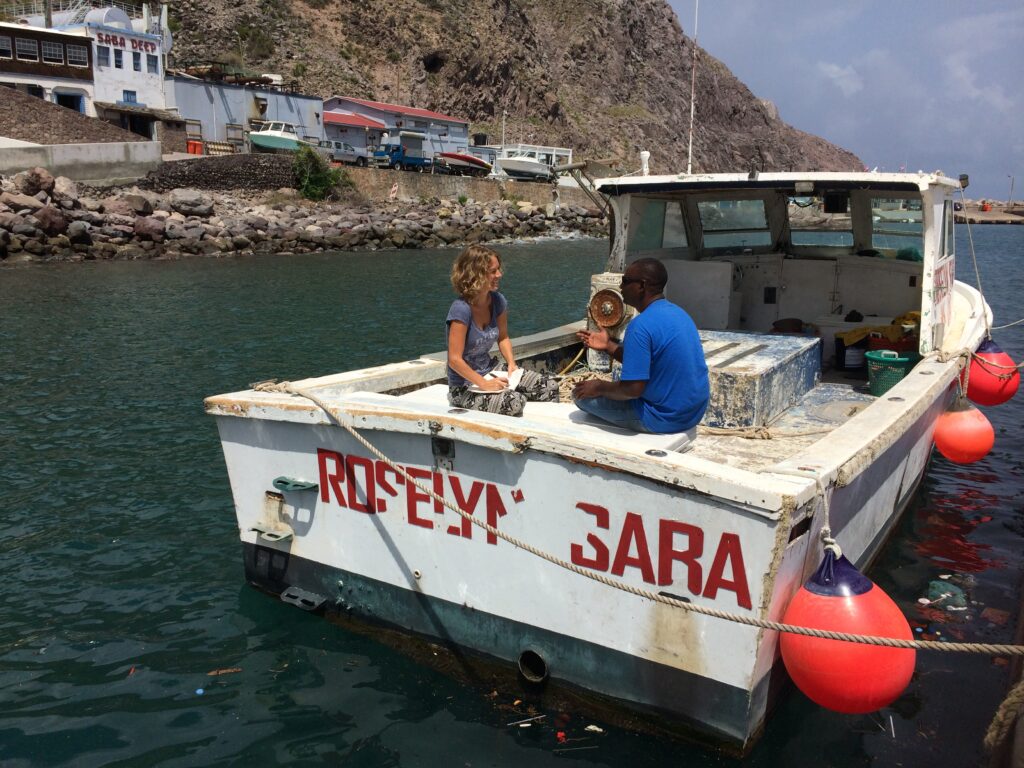 Me interviewing a Saban fisherman

Getting the system into the room

In order to create something that will reach DCNA’s goal of saving sharks, it is important to take the entire system into account, thereby involving all kinds of different stakeholders. Action research does exactly that. I interviewed not only fishermen, but also their family, divers, staff from Saba Conservation Foundation (SCF), government officials, elderly, church representatives and others and asked them about their views on the marine ecosystem.

Putting these different perspectives together gives great new insight and provides possibilities to make combinations of problems and solutions no one ever thought of! Focus group discussions and other methodologies make it possible to co-create these solutions and put them into practice. 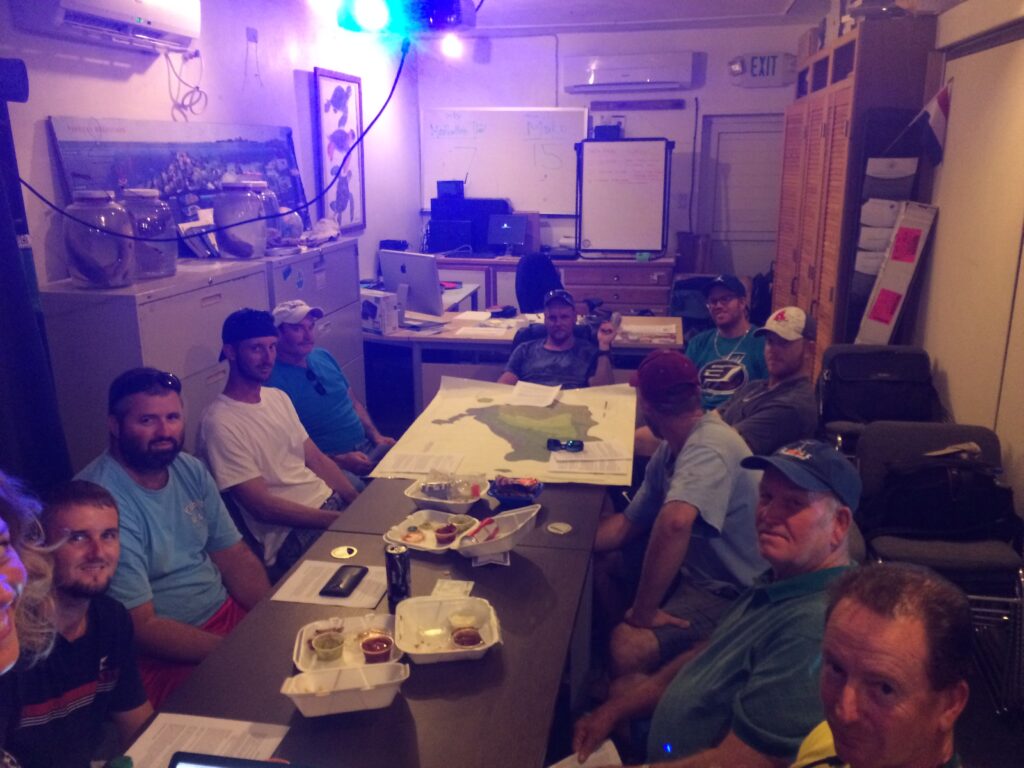 All fishermen said to be worried about the redfish population. Over the last 15-20 years, this fish has been declining rapidly. As one of the fishermen says:

“Overfishing is the biggest threat to the redfish, then second comes the lionfish.”

Concerning overfishing, fishermen all feel there should be a closed season for redfish. But for how long? And which area? Opinions were divided. The methodology of action research made it possible to showcase perspectives, from which we could literally calculate the common interest. Shortly after there it was: the Fishermen’s Agreement on Seasoning for Redfish! For six months, starting April 1st 2017, they will stop fishing for redfish for six months, on the entire Saba Bank! 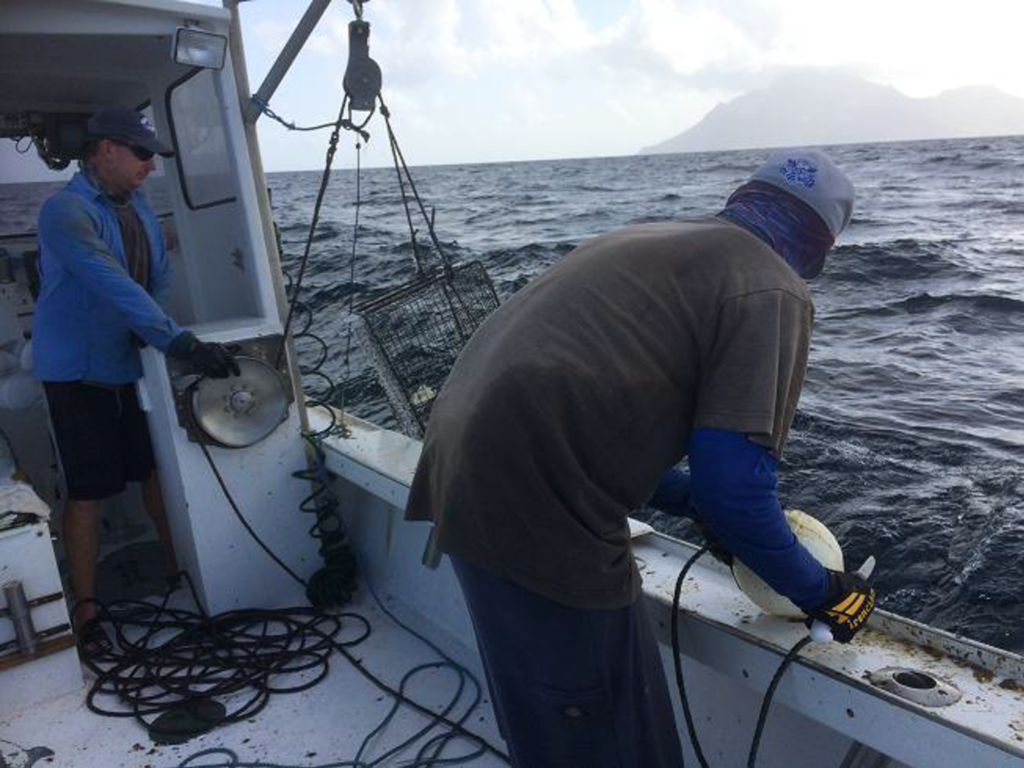 Saban fishermen at work on the Saba Bank

How to cover up for the loss of income was still quite a challenge though. Giving tours to tourists? Renting out their boat? Their ideas were not commonly shared among fishermen. Until a totally different solution came from a different corner: chasing a plague! As the fisherman said: “…then second comes the lionfish”.

Combining endangered species with… a plague?!

Amongst others, mostly divers and some staff from SCF expressed their worries about coral and the lionfish plague. Lionfish is an invasive species that damages basically everything he can find on his path, including coral and… redfish! The only way -up until recently- to get rid of these little bastards is through spear shooting. One by one. As the lionfish has no natural predators and knows very well how to ‘get it on’, keeping its population under control is like trying to kill a huge ants nest with a safety pin.

Lionfish. A beauty to the eye, a monster to the marine ecosystem. Source: National Geographic.

One diver though said during an interview that he knows an organisation called The Frapper in Florida, who experiments with lionfish-specific traps. If these traps turn out to work well, that would mean it is possible to catch huge amounts of lionfish! And the added bonus is: there is a massive market for lionfish! It turns out to be a delicacy and there’s even beautiful jewelry to be made out of its spines.

A simple phone call to The Frapper asking: “are your traps ready to use?” was enough to get it all rolling. “We are in our last experiments”, founder Bob Hickerson said. “We only need a place to practice our last experiments in real life.” You’re feeling it? Here’s the formula:

(As in: squared recovery! Redfish will recover from the closed season but can recover faster without lionfish around, and also the coral will recover.)

Seasoning for redfish = lack of income for fishermen

So basically, the process has led to a new system in which economic benefits are now combined with nature conservation instead of having to give up resources. All of this discovered and co-designed by local stakeholders. With a little help from action research.

Ps. I would like to thank to all respondents of my action research on Saba, including fishermen and their families, divers, Saba Conservation Foundation Staff, government representatives, experts, church representatives, chef cooks, and many others, for their input!

ps2. Recently I read an article from The Correspondent about how declining fish stocks are at the base of today’s biggest global issues. It shocked me and made me write a blog about it. Read the blog here and the original article written by Tamar Stelling here.