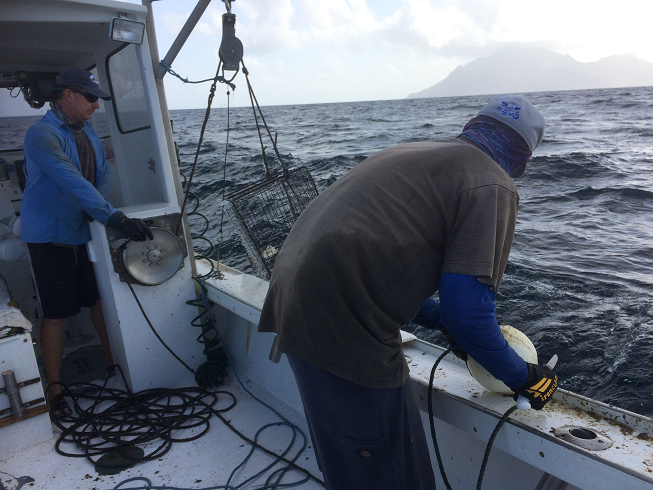 This article written by Correspondent’s Tamar Stelling about the root cause of today’s global wicked problems really shocked me. The situation is even worse than I thought! We all know the oceans are not doing very well lately. The plastic soup, overfishing, oil spills, just to name a few threats. Stelling states that the declining fish stocks worldwide lie at the very base of many other wicked problems, such as poverty, piracy, mass migration, war, modern slavery and all that kind of creapy stuff.

This calls for some serious action on recovering low fish stocks. But if this problem is at the very base of contemporary global issues, then how is it possible, that there is still so little focus on improving sustainable fisheries? Is it not catchy enough for politicians?!

“Laws pushed down your throat”

Sometimes -seemingly out of nothing- there suddenly pops up a law from the government that prohibits fishermen to fish a certain fishtype. When I did action research on Saba in summer 2016, local fishermen told me they feel these laws are ‘pushed down their throat’ without consulting them first. “How can they come up with laws from their ivory tower, whereas we are out fishing 15 hours a day?!” Saban fishermen are probably not the only ones who feel excluded in the development of new laws and regulations. Some fishermen tell me they see it as a game, disobeying these top-down laws under the guise of ‘catch me if you can’. “That’s what happens if you don’t consult us first”.

Whenever the few times the subject of declining fish stocks comes up in conversations, fishermen are presented as ‘the bad guys’ as “they are the ones overfishing”. Don’t get me wrong, they look and sound a little rough from time to time, but under that tough skin there’s a man squeezed between top-down implemented laws on the one side and financial challenges on the other. And is overfishing really that one and only big issue?

Saban fishermen at work on the Saba Bank

Saban fishermen are now taking matters into their own hands, tackling the problems on the Saba Bank, their fishing area. Based on their knowledge of fishing and the marine ecosystem, and that of local divers, nature conservationists and experts they co-created and signed an agreement for a closed season on redfish. By the first of April 2017, they will take out their redfish traps, taking a huge financial risk. It takes courage to do so and seemingly for the fishermen on Saba there’s no other option, as the worry for redfish is present for two decades now and they see marine life deteriorating in front of their eyes.

Overfishing not the only threat

Although overfishing is often presented as the biggest threat to declining fish stocks, there’s another big threat for fish, corals and the marine ecosystem as a whole: the lionfish. A plague without natural predators that -God knows how- entered the oceans a few decades ago.  Up until now, these little terminators are caught by spear, one by one.

A lionfish caught with a spear by a diver. Source: Nature.

A Saban diver pointed out that there’s an American organisation experimenting with lionfish traps. If this works, huge amounts of lionfish can be caught! As there is a market for lionfish (delicious fish!), this could be an alternative income for the fishermen during the closed season for redfish.

If Saban fishermen can join this experiment, this would mean a new economic incentive for nature conservation!

Looking at the declining fish stocks as the very base of many wicked problems worldwide such as poverty, what would happen if stakeholders in the entire Caribbean and beyond, would co-create together new ways of improving the marine ecosystem, through creating new economic incentives for nature conservation?
I keep my fingers crossed, but if this works on Saba, it could mean upscaling this Saban concept to other areas across the globe, tackling the very base of today’s most wicked global problems pointed out by Tamar Stelling, from the community up.

Ps2. Many thanks to all respondents of my action research on Saba, including fishermen and their families, divers, Saba Conservation Foundation Staff, government representatives, experts, church representatives, chef cooks, and many others, for their input!

Ps3. Together with Bob Hickerson, founder of The Frapper and local Saban fishermen I am currently looking into funding for executing this experiment on the Saba Bank. Do you know people or are you that person who wants to help? Please contact me on email: madelon@7sens.es or by phone: +31(0)6 39895095. Thank you!