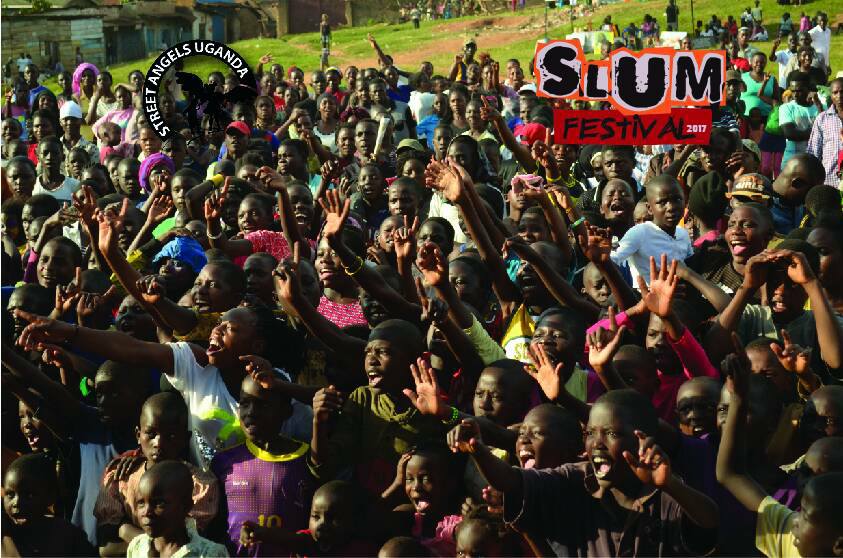 I jumped on Asuman’s ‘boda boda’ as if the last time I sat on such Ugandan motorbike was just yesterday. He brought me straight to the hectic center of Kampala, where I was going to meet Dan Sentamu to evaluate the outcome of the Street Angels Challenge: the Street Angels Slum Festival. As one of the locals from the slum, together with his colleague Andrew Lubega from grassroots organisation Street Angels Uganda, he joined the ‘Street Angels Challenge’ back in 2014. It was one of 7Senses’ first pilots of the then brand-new Participatory Action Research programme: the 7Senses Challenge. In a team together with Nathalie Vennik and Jolijn Polet from the Netherlands I trained them in PAR ‘on the job’ for 10 weeks in Kabalagala, one of the slum areas in Kampala.

Check this video of the Street Angels Challenge:

Tackling neglect of slum residents with a Slum Festival

Together with the local residents, the team co-created the ‘Street Angels Slum Festival’ as a response to the neglect slum residents feel from people outside the slum: the government, the rich and the ‘Muzungu’

(white man). The slum festival, held in Kabalagala slum a few months later, aimed to give slum people the opportunity to showcase different arts and crafts pieces to visitors from outside. In the weeks before the festival, they would receive workshops and create beautiful arts pieces to be exposed. There would be music, dance, face-painting and many many more.

Of course we pretotyped the festival during the Challenge. See this video:

The local community expected this festival to be the bridge between them and ‘the outside world’. But is that the case? Do slum residents indeed now feel less neglected? This question made me a bit nervous as I came close to our meeting place. Of course, I have seen the happy pictures on Facebook and I have already heard some great stories. But this evaluation would be more of the ‘serious kind’.

Evaluation in PAR – how do we measure results?

Dan shares the results of the Slum Festival

It was great to see Dan again, it seemed like those years had stood still. He started off. “The 7Senses Challenge  helped us to streamline our activities and to understand the needs and complexities of the community. It was a way to discover what we needed to do. How to engage with people. When we worked with musicians

for example, many of them are now professionals. Women who we trained to do paper crafts, they have jobs now, they make new items out of garbage. Children are now better able to express themselves. It guides them to see the light. And there is more awareness of people’s human rights.” The wide diversity of outcomes overwhelmed me, and I tried to understand more. “Is that all as a result of the festival?!” I asked. “Yes, each year the Slum Festival addresses a different theme. It is a well-received event, it has grown up to 7000 visitors”. He looked at me as if it was normal, as if from the beginning he had expected this to happen. Me on the other hand had not expected this at all and he must have noticed. So he continued. “We already had slum festival kind of plans before. The Challenge gave us directions on how to start and how to

continue. We researched the ideal and the actual situation. The Challenge was the springboard, an eye opener to us. Now we have done the festival in Kabalagala, Katwe, Bwaise and Kamoja.

Still amazed by his words, I was also curious to any lessons learned for the future. “We should have managed expectations better. The community was not known with action research and did not know what they could expect. But even up to today we use the same model of action research. It is about engagement, you have to give people allowance to be part of it. Now the question is how to continue to engage the community, we did not think enough about that back then.”

“So what is your next step?” I asked. Dan’s story took an unexpected turn. “Well, we want to set up a community centre, where multiple workshops can be given.” I was happily surprised by his ambitions. “Wow, that’s great! How are you going to do it?” His question was a bit surprising. “Well, do you know a professional curriculum designer who can help us?” “I don’t know”, I said, “but are you sure you need one?” He looked at me, a bit confused, so I continued. “How about letting the slum residents design the curriculum? Having the ones who want to teach and the ones who want to learn come together to co-create it?” Silence, and the same look on his face, leaning backwards in his chair. I continued. “Just start, create your first successes, and professionalise as you go, step by step towards that community centre.” An excited look appeared on his face. “That’s what I’m going to do! That is it!”

Dan and me said goodbye and I jumped back on Asuman’s boda. A sigh of relief as we drove off back onto the crowded road.

The evaluation of this Challenge will be continued with the collection of more stories.