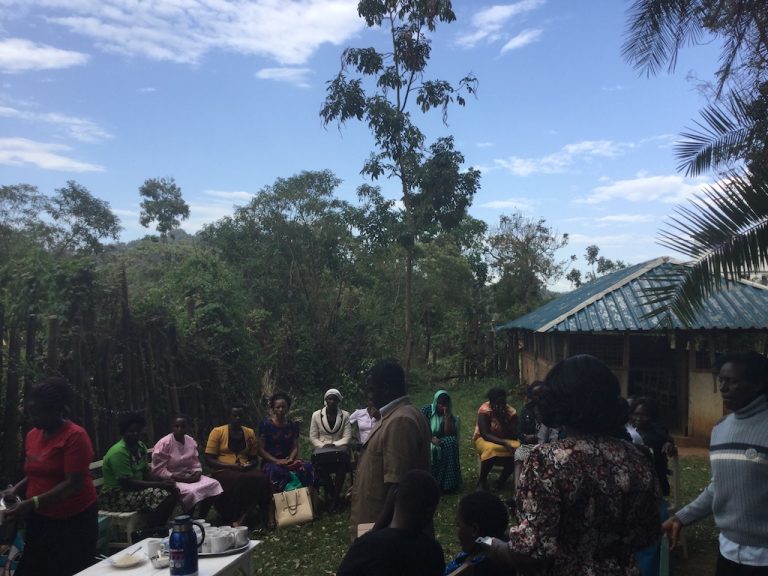 Phyllis Livaha is Coordinator of the Female Rights Challenge in Kenya. She conducts PAR for her PhD at the Erasmus University College. She writes blogs about the progress of the project.

Where Does the Time Go?

Wow! It feels like I just came to Kisii the other day, and I’m in the middle of my second month of research. I hit the ground running, literally. After landing in Nairobi and celebrating the New Year, I went to Kisii on the 4th of January 2016 to meet with Francis Maina (Maina) and Lydia Mukami (Lydia), the local researchers.

Although born and raised in Kenya, I never lived in Kisii; so for me, this was a new experience. I have a cousin who has lived here for a while, so I called him, and he happily said I could stay with his family. I had never met his wife and son after all, so it was a perfect time to get to know them. They welcomed me very well. For the two nights I stayed with them, I went back in the evening after a day with Maina to home-cooked meals and warm water for my bath. Caleb, their three-year-old son, was very social, and happy to give me many stories.

On the second day, my cousin took me to meet Maina.
One thing I realized was that the streets were packed. My cousin explained that it was because it was a market day, although I came to learn that Kisii is densely populated.

Maina grew up in Central Kenya, but he has lived in Kisii since 1991 and even speaks the language. He received me well and immediately started showing me around. We walked all day, and in the evening, he wanted me to meet one of the chiefs who was his friend. We went to this small restaurant where men were sitting around drinking coffee. They offered me ‘teargas’, a drink made from lemon and ginger, but I politely declined. I later came to learn that it was the place where people, mostly men, meet to talk about politics. I spoke with the chief briefly outside, and he later became a big asset to our project. The following day, after meeting with Maina for a few hours and walking around some more, I went back to Nairobi.

I tried to look for a place to stay while in Kisii, but wasn’t lucky. Both Maina and my cousin were not very familiar with short-term living arrangements, apart from hotels. The following week, I travelled back to Kisii with Lydia. I had been trying to house-hunt online, but with no luck. We got to Kisii on a Wednesday evening and decided to stay in a hotel. We went to Zonic, the one I was familiar with, since that is where I had met Maina. Not the best choice, though. My bathroom was flooded, and there was water dripping from the toilet cistern. The water in the shower was cold, and I was told it’s because it comes from the top floor and takes time to get warm…

“While I thought it would be difficult to talk to people about a sensitive subject like female circumcision, both leaders and the common “mwananchi” (civilian) easily shared their thoughts on the practice, and a clear consensus emerged: female circumcision is still practiced, but secretly.”

The following morning, we had breakfast and then met Maina to start the long day of looking for places. We went from hotel to hotel, and I called my friends in Nairobi who also started helping. Finally in the evening, with the help of one of my friends, we got an expensive apartment. It had the basics, but for the amount of money they were charging, they could have done more. I was happy to get a place, but continued to look for a cheaper one.

Both Lydia and Maina wanted to start the immediately, and we conducted two team workshops in the first week. During the workshops, we talked about our styles of working and about the research design. The days seemed long, but they were productive. We agreed to start with individual interviews and then move on to focus-group meetings.

That weekend, I went to visit my parents, who live about 3 hours away in a small town. It was good to see them again, and I got energized to start the data collection.

While I thought it would be difficult to talk to people about a sensitive subject like female circumcision, both leaders and the common “mwananchi” (civilian) easily shared their thoughts on the practice, and a clear consensus emerged: female circumcision is still practiced, but secretly. Most people, including the leaders, didn’t know what the law stated, but just knew if someone was caught circumcising a girl child, he/she would be arrested. A few people know about the health hazards of the practice, but most of them also said that medical practitioners are the ones who encourage it the most, and charge a hefty fee for doing so, regardless of whether it’s part of their culture or not.

At the end of January, the challenge participant from the Netherlands arrived. Her name is Ermesinde de Strijcker, and it was exciting to wait for her to get here to join the rest of the team. My friend’s mum picked her up at the airport and brought her all the way to Kisii to make sure she was safe. I made food for them, and made sure Sinde had enough sleep that night. The following day, I walked her around the town, and gave her tips on how people socialize.

She was the only ‘mzungu’ (white person) in the area, so she attracted a lot of attention. This still happens to date. I took her to the research field after the weekend, and together we interviewed a few people. She learned very fast, although at some point, she still wanted us to practice a role play to boost her confidence.

We have interviewed about 100 people in both Kisii and Nyamira counties. I have met so many good people who are willing to assist us with our research.

One in particular, Chief Opanga, made sure he connected us with other chiefs, and introduced us during a ‘baraza’ (public meeting) to several people, some of whom we interviewed. It was also a good opportunity to observe what the community does during a public meeting. This was a whole-day affair, and many issues were touched, from roads to illicit brews, and even female circumcision (although I believe this was because we were there).

Two other people who stick on my mind are a deaf lady we interviewed and her interpreter. The two met when the lady’s husband, who is also deaf, came to look for a job for her at her interpreter’s restaurant. He then found out the interpreter knows sign language. The interpreter learned how to sign from her sister-in-law (her husband’s sister, who is also deaf). She never went to school to learn it, but was very efficient. It was fascinating to watch them communicate.

But of course it was not all work. Sinde and I went to Kakamega Forest on one weekend and attended a huge birthday party on another weekend. We also visited the Ogembe Tea Factory, here in Kisii. Maina, who knows the production manager, made the arrangements for us. It was fun to see the process of tea-making from the beginning to the end, and go through the various steps of transformation. It made me think of our lives and how we transform.

This past weekend, we decided to go and visit our other colleagues, Alim and Anouk in Nairobi (Education & Talent Challenge, red.). We walked with them to the area where they will work in Mukuru slum. Seeing how people live in these slums gave me focus again, and made me remember to be grateful for what I have. It’s not much, but I don’t have to walk through the sewage every day.

At the same time, this slum has also produced amazing people who are willing to give back to their community. We met just a few of them, but hope to meet more in the near future.

This week, we hope to prepare a focus group. We’re all looking forward to it, but we haven’t discussed it in detail. How will it be? What will it look like? How many participants will we invite? What will we give them to eat and drink? And most important: what will the participants come up with? Are there any alternatives to female circumcision? Are people willing to change the practice? So many questions. Look for the answers in my next blog!