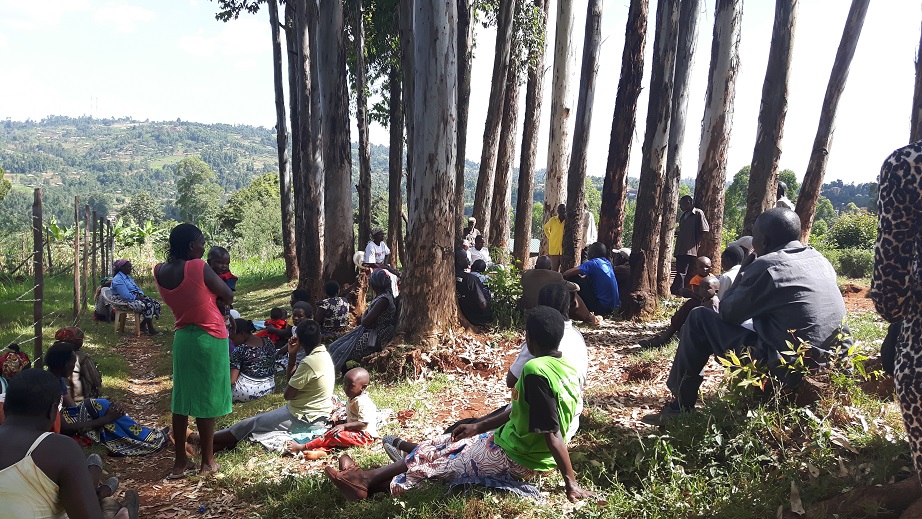 The Female Rights Challenge was just the beginning

Phyllis Livaha is Coordinator of the Female Rights Challenge in Kenya. She conducts PAR for her PhD at the Erasmus University College. For 7Senses she writes blogs about the progress of the project.

There were four of us, and we divided ourselves two units of two people each. Each day, one unit would go to one area and the other unit would go to another. We would then exchange the results later in the day.
The community chiefs were always very cooperative and invited us to more barazas (public meetings) where we either interviewed some of the community members or made arrangements to interview them in their homes. We met village elders at these barazas, and the elders also gathered people for us when needed.

One day, while in the town, Sinde saw another mzungu (white person) speaking with a local, and curiosity got the better of her, so she decided to call him over. We found out that he was a Witness for Jehovah, and he invited us to Jehovah’s Witness Kingdom Hall the following day to celebrate Easter. Neither Sinde nor I had never attended a Jehovah’s Witness meeting, so we decided to try it out. Needless to say, it was very interesting, and an invitation to their house followed. There, we talked about many things, female circumcision included. They then sent us information explaining how they dealt with it.

What we found out

While some community members said that female circumcision is no longer practiced, most said that it was, but in secret. Almost all of them, including the leaders, said it was now being practiced by medical practitioners, and not traditional circumcisers.
Many people did not know what the different laws on female circumcision stated, but only knew it was wrong to practice female circumcision and one would be arrested if caught. Two leaders were confronted with cases, and reacted to them. Others said they did not get any cases, whereas some community members said the leaders were not arresting anyone because they were being given bribes. While some people thought the law worked, most people did not think the law was a good way to end the practice.

They said the community members need to be made aware of the problems with the practice. Some said there is resistance because of fear and lack of consultation.

A few participants stated that the issue of female circumcision should not be tackled in isolation. It should be integrated in day to day issues, and not only give campaigns or provide rescue centres in August and December when it’s normally practiced.

Local Organizations in the driver’s seat

We managed to locate four local organizations that were working on the issue: (a) The YWCA, which had worked on the issue of female circumcision before but stopped when the funding ran out; (b) Fulda-Mosocho Project, which is still very active and uses a different method to create awareness; (c) Vinbel Foundation, a newly-formed organization that is working with women and girls through empowering them with information on several issues affecting them like female circumcision, feminine hygiene, rape, education among others; and, (d) Adventist Development and Relief Agency (ADRA).

YWCA offered a rescue camp for girls during the months that circumcision is practiced, mainly in December. They also recruited some community members who they trained and used them as volunteers to go to the villages to talk to other community members. When the funding depleted, the volunteers found it difficult to go to the villages, because they lacked fare. While they were willing to spread the word, lacking the fare made it impossible to do it.

Fulda-Mosocho Project does not provide rescue centres or camps for the girls. The do it very differently from other organizations. They use the value-centred approach method which focuses on the needs of the community. What is taught is not “forced upon” the participants. Local multipliers, like teachers and clan elders are trained, and then they disseminate the information to their families, in class and in the neighbourhoods. Through this program, community members are given the chance to make individual decisions in favour of the integrity of their daughters without coming under pressure. The organization does not use the term prohibition or eliminating the practice, but use the term overcoming because they give ideas to the community members and then the members themselves make their own decisions.

While we interviewed individuals, we also met with groups. One group, consisting of seventeen women, stated that female circumcision was no longer practiced in the village. When asked the reason for stopping the practice, most of them stated that it was because of the side effects that girls and women had from the procedure, one being difficult childbirth. On being asked if they had experienced difficulty during childbirth, they all said they never had any complications. When asked where they got the information on the side effects, some said they heard it on the local radio (there is a program on the radio about female circumcision) and some said they heard it from organizations that came to the village.

The women expressed their concerns on other issues. Their main concern was being self-sufficient through creation of a business as a group. They had formed a group previously, but that was dissolved. They said that while they were eager to work together, they were not educated, and did not know how to make it work.

The other focus group consisted of various participants of different ages and different careers. There were also leaders in this focus group. There was a good debate in this group. While some supported female circumcision, most did not. At the end, the group came up with points to consider as a way to move forward, among them being to involve the people in the community and very clearly explore both the pros and cons of the practice and to stop the medical practitioners from doing the procedure. One participant, the program coordinator of YWCA said it would help to look at the issue alongside other issues, like health, and not in isolation.

We had another meeting with three women who had philosophical questions. Some of the questions were: what should be done if a woman who has undergone the practice does not experience any complications? Why should one who has not undergone the practice feel that she is more of a woman than the one who has? What about circumcising professionally, which is what is happening now? Is the need for ending the practice from people practicing it or just those reading about it from books? How are the laws crafted and who is doing it, and for what need?

Winding up and the way forward

I enjoyed every single day of work. One highlight was meeting the young women of Vinbel Foundation who were passionate about sharing with the young girls and did it purely on voluntary basis. The community members on seeing the passion of these young women, offer to assist so that their daughters can be taught. They provide different resources like food or fare for the girls to attend camp sessions. Another lesson I learned was the reason why female circumcision is termed as female genital mutilation (FGM), and why it is different from male circumcision. Someone who had undergone the procedure said it is funny how people who have not undergone the procedure get to debate on what to call it, without consulting the women and girls who have undergone the practice.

Another thing I learned was that there was a catholic priest who condemned the practice in Nyamira location back in 1970, and was almost chased away. The community claimed that he was not Kisii. The catholic church therefore stopped being vocal about the issue.
On the last day of the Female Rights Challenge, we had a meeting with the program coordinator of Fulda-Mosocho and the chief of the Nyakoe location. We had a fruitful discussion on what would be done moving forward. One of the things discussed is looking for ways to advertise about the work of the organization on the radio so that more people can hear about them. The lack of government assistance was a concern that was raised. While the government has stated in the National Strategy that it is working with local organizations, that is not exactly the case in Kisii. Facilitators from Fulda-Mosocho Project, for example, have operational costs that are difficult to cover. Although some of the community members volunteer, for example providing vehicles for transportation, resources and support from the government would help this organization and others reach more people.

I am still in touch with the organizations because one observation during the conversations with these organizations was that they don’t coordinate, but work in isolation. Since all the organizations are doing such a good job in working with the community, this can be further strengthened by their collaboration. While we completed the Challenge, I strongly believe change will continue in Kisii and Nyamira counties and the community members will succeed in overcoming the practice!