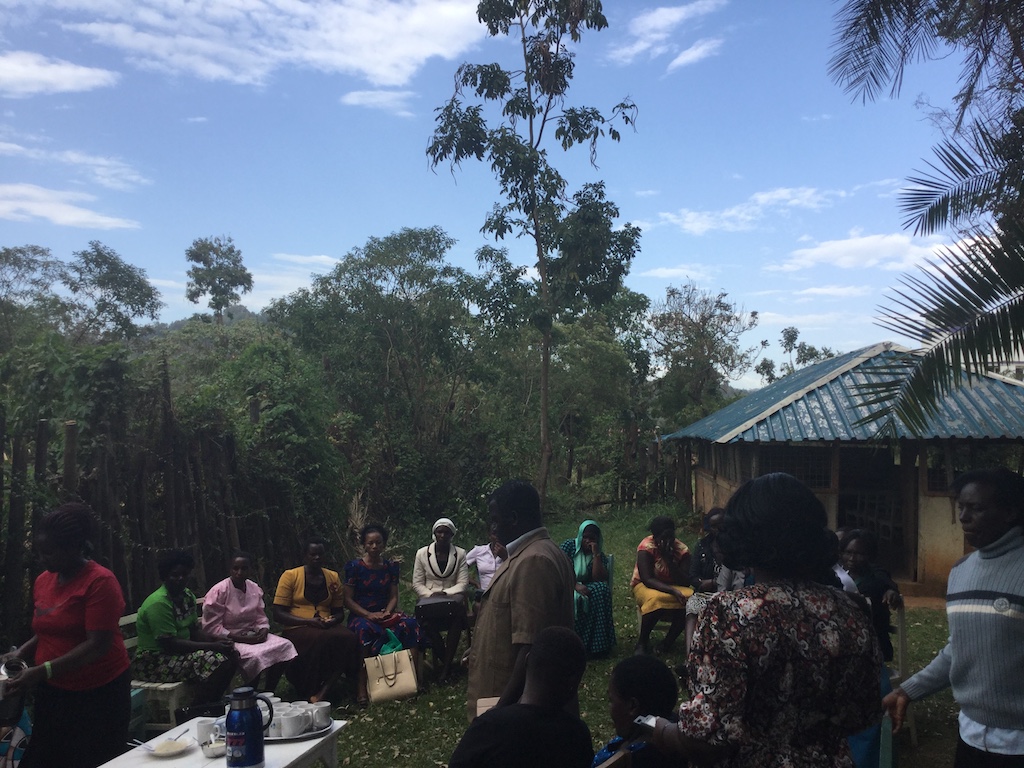 After one month in Kisii, the interviews during the Women Empowerment Challenge are progressing well. We are learning a lot from the interviews. One lesson is that both men and women are being empowered through community Self Help Groups. We are also learning a lot just from observing the daily proceedings of the community and state of affairs, from unofficial economy to the politics.

Preparation for the interviews

My local team – meaning local researchers Mary and Godfrey, plus myself – agreed on starting with six Self Help Groups (in Swahili a self-help group is known as Chama). Why six groups? Mary and Godfrey were familiar with these groups, which were within Nyaura sub-location/Ward within the Kisii County. While deliberating during the workshop in preparation for data collection, we talked about our styles of working and about the research design. We agreed to start with individual interviews and then move on to focus-group meetings. We also agreed to start with the leaders of the groups, and then move on to the members.

One of the Self Help groups (Muungano) invited me to attend one of their weekly meetings. They meet on Wednesday every week. It was good to observe their proceedings. One thing I realized was that while it was a group whose members were both male and female, there were more women present for that meeting.

The meeting began at exactly 3 pm with the treasurer explaining how much people had contributed within the week, how much they had made from renting out the chairs and the public address system, and the balance they had in the books. I later learned that they had purchased chairs and the public address to rent so they could make a profit. The chairman then took the floor – and was immediately interrupted by a ringing phone. He pointed to the person and said, “pay your fine.” I came to learn later that one of the clauses in the constitution states that one’s phone has to be off or on silent when s/he attends the meeting, or else s/he pays a fine.
There were about fifty people in the meeting. Later, one member expressed his dissatisfaction with one of the leaders, so the leader was asked to remain behind afterwards. We started with data collection the following week. People were welcoming and ready to talk about their positions as either leaders or members in the groups, their reasons for joining or forming the groups, and their status before and after joining the groups.

A visit to the Chief: a Challenge on itself

We wanted to see the chief and give him the report from the previous project (female circumcision: the gap between law and practice) and also interview him as a leader of the community, on his role where women empowerment and self-help groups are concerned. We went on two different days, but he wasn’t there. We decided to visit him a third time, but still missed him. Godfrey said that the chief may have been walking around people’s homes in the constituency making sure they had identification cards, which are needed for one to vote in the elections taking place this coming August.

We decided to wait for a while and see if the chief would show up. While we sat on a tree trunk in the shade, a jeep came into the compound and stood right next to the chief’s main office door. People were then led out of the car, and some of them were handcuffed. There were two ladies and three men. There were two jerry cans that were also taken out of the car, and put on the ground and later taken in the office along with the people. On enquiring, I learned that those people were arrested for either brewing, selling or drinking illicit brew (there are two common brews: Chang’aa and Busaa). They were then brought to the Chief’s office which has a small cell, and were later to be taken to a police station with bigger cells. The region is known for the illegal brewing and the police every so often crackdown the drinking dens and arrest those involved.

What will happen to them? I asked. Godfrey laughed softly and said they will have to pay a bribe or they will spend a few nights in jail. I was further told that the brewing will not stop because not only will those people pay, but there is some arrangement between those who brew and the authorities. Some of them pay a monthly fee to the authorities so that if there’s a raid in the community for the people brewing, they are not affected. Therefore, those who were caught either did not pay the fee or were not on the list. I asked where the brew that was in the jerry cans would go since it is supposed to be used as exhibit, but if they were bribing their way out, there was no use for that. The administrative police officers (APs) in the chief’s camp either drink it or sell it off to the ‘legit’ brewers.
There was an AP sitting outside the office along with two women when we came in. After the supposed brewers were taken in along with the brew, the older woman who was sitting with the AP went to one of the houses in the compound where the AP’s live and came out with a bottle inside a plastic bag. The AP took it, went inside the chief’s office and after a few minutes, came out with the bottle and gave it back to the woman. Allegedly, that was some of the brew that had been brought in.

As we were walking out, one gentleman passed us, and Godfrey seemed to know him. They talked a bit, and the gentleman said he had gone to give a bribe for his friend and was told he had to bring Kes. 2,000 (about 18 Euros). What amazed me was the fact that it seemed like the order of the day. I remember when I went for the public meetings (barazas) last year, the problem of illicit brews the problems they create in the community was mentioned in every single one of them. I realized it was a bigger problem than it seemed, and unless another approach is taken, depending on the authorities to solve the problem is a waste of time.

We were invited to a women’s group meeting one afternoon as we were doing our interviews. We were told the group was going to talk about development and some politics. I thought this was a good chance to observe further, how women empower themselves. The meeting that was supposed to start at 2 pm started an hour and a half later. It turned out that the group was political and represented women who were supporting Jubilee, the current political party in power. The group was strategizing how they would welcome the president and other politicians who came to Kisii County to campaign, being that it is an election year.

The treasurer of the group stated that the group was well known nationally, and there was a central system for those who had registered from different counties. She stated that there were women who were trying to mimic the group so that they would get money from the politicians, but they failed because their names were not in the system. She also stated that their aim was to not only get money from the politicians, but also have a long-term vision that would benefit the women in the community. However, this vision was not discussed; but instead, we learned two songs from a music teacher they had invited to prepare us for the politicians who would come at any time. We were also asked to wear red dresses when they alert us (which they would do at any time, so we had to be ready) and meet on time at an agreed location. The meeting ended with provision of tea that the treasurer said had been paid for by one of the politicians. 🙂

See below our first results on Self Help Groups (Infographic created by Loes Jeucken, Challenge participant of the Women Empowerment Challenge